The fairy ring transportation system is unlocked by members after starting the Fairy Tale II - Cure a Queen quest and getting permission from the Fairy Godfather. It consists of 45 teleportation rings spread across the world and provides a relatively fast means of accessing often remote sites in RuneScape, as well as providing easy access to other realms.

Players can access the fairy ring system from any fairy ring while wielding either a dramen staff or lunar staff. From there, using three letter codes, they can teleport to most rings within the system. If the Lumbridge & Draynor Diary is fully completed, no staff of either kind is needed.

Several rings, however, require players to complete quests before they can be accessed. If the selected code has no corresponding fairy ring or is a fairy ring the player is already located in, players will not be teleported anywhere, exclaiming "Wow, fairy magic sure is useful, I hardly moved at all!"

Players with level 85 in Construction can build a fairy ring in their superior garden.

The animation when using the fairy rings.

Note that Fairy Tale I - Growing Pains must be completed to access the fairy rings. Fairytale II - Cure a Queen does not need to be completed, and players do not need any of the skill requirements.

When using the fairy rings, a travel log will pop up. This is a list of rings to which you have recently travelled. This is useful, as you can just click on the ring code in the travel log and the code will be automatically entered. Up to four fairy ring codes can be marked as favourites for quicker code dialling to frequented rings. 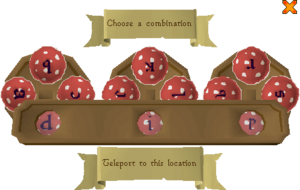 To use the fairy rings, players must complete the following quests:

One may quickly access the fairy rings in any of the following ways:

Alternatively, one can use bip to reach the Nature grotto altar with 50 agility (54 tiles and a shortcut). This altar also boosts your prayer by two points over your level.

Note: Tiles are measured without diagonal steps and may be more or less based on teleport deviation.

Currently, there are 45 working fairy ring codes out of a total possible 64 codes.