From Old School RuneScape Wiki
Jump to navigation Jump to search
The RuneScape Wiki also has an article on: rsw:Falador Mole Lair

The Falador Mole Lair is a dungeon located in Falador. To get here you must have a light source (lit candle, lantern, etc.) and dig in one of the mole hills in Falador Park with a spade. There is a level 230 Giant Mole inside, as well as some baby moles. It is advised for lower levels to avoid this area. Also, when fighting the mole, sometimes it will retreat and dig under the surface, extinguishing your light source. You will then need to find it again. To get out of this labyrinth, go to the southern end and jump on the rocks. After that, climb the rope and you will arrive at a well south of White Knights' Castle. If you have mole claws or hides, you can trade them with Wyson for bird nests, which contain seeds and jewellery.

A light source is not required after the player has built a Fire of Eternal Light in the old fire pit near the entrance to the cave. 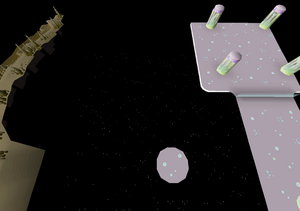 A part of the Dream World, visible from the Mole Lair.
Retrieved from ‘https://oldschool.runescape.wiki/w/Falador_Mole_Lair?oldid=14266205’
Categories:
Hidden category: