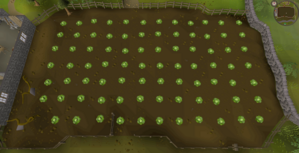 The Falador cabbage patch is a small fenced area south of Falador next to the Falador farm. The cabbage patch contains 83 cabbages. It is easily accessible after completing the Lumbridge & Draynor Diary using the teleport on the Explorer's ring.

The cabbage patch was featured in the 2016 April Fools event. During the event, numerous varieties of cabbages could be found in the patch, and picking them would increase the Cabbage Picking skill.

Immediately north of the cabbage patch is a farming allotment. The farm's tool leprechaun will not note cabbages, as he will exclaim, "A cabbage? Don't ye go showing me yer cabbage; this whole farm stinks of the things! Take it away and get it exchanged somewhere else." This has probably been placed there by Jagex to stop players from using him to obtain massive amounts of cabbages.