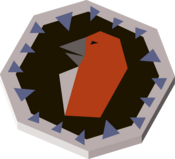 The Family crest is a quest item obtained during the Family Crest quest. It is made by combining the three crest parts given to the player by the Fitzharmon brothers, Avan, Caleb, and Johnathon, in return for performing a set of tasks for each brother.

If a player tries to put the crest back together with only two pieces, they will receive a message saying "You still need one more piece of the crest."

The completed family crest must be returned to Dimintheis Fitzharmon, the brothers' father, in Varrock to complete the quest. You can obtain multiple crests, the 1st crest part from Caleb can be obtained through drop tick, the 2nd crest from Avan is not until you get the 3rd crest part by defeating Chronozon, the 3rd crest part can be obtained multiple times by killing Chronozon only during the quest. Dimintheis Fitzharmon takes all crests from your bank and inventory.