Farmer Hayfield is a farmer who tends to his Bologano plant in a small greenhouse just south of the Hosidius bank. 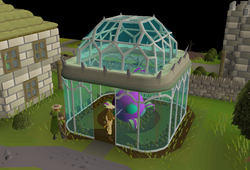 Farmer Hayfield tending to his plant.

He does not seem to heed the player, and ponders whether his flowers are alive, despite there being none. This is most likely an oversight, as he previously was found in a larger greenhouse with two flower beds prior to the Hosidius rework.