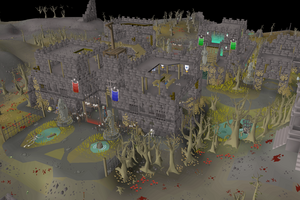 Ferox Enclave is the restored remains of a small town south-west of Carrallangar (known today as the Graveyard of Shadows) that was once part of the Zarosian Empire, abandoned and left to decay over the ages. It has recently been turned into a safe haven for travelers by Ferox, an ex-Zamorakian acolyte who is searching for knowledge in order to learn about the history of the Wilderness.

The town is a safe area within the Wilderness, meaning players cannot kill other players while within the boundaries of the town. Players who have had Tele Block cast on them will not be able to enter the town from the outside until the spell has worn off, though players can still enter whilst in combat. Outside of the town by each entrance, there are a few tiles where players cannot be attacked, however whilst teleblocked they can still be attacked here.

The town is home to Clan Wars and Last Man Standing, as well as portals to Castle Wars and Death's Office. There is a chapel with an altar and the Pool of Refreshment which restores the player's hitpoints, stats, and prayer points (but not special attack energy).

Players who have paid Ferox 5,000,000 coins can set their respawn point to Ferox Enclave, by the eastern barrier.

The level 13 wilderness obelisk is east of the Enclave. There are also three safe methods of reaching Ferox Enclave that do not require players to traverse the Wilderness:

Ferox Enclave is home to refugees and travellers seeking sanctuary in the harsh climate of the Wilderness. As such, followers of various religions appear to tolerate each other's presence within Ferox Enclave; for example, Lisa and her wizards are Guthixian followers, Andros Mai and Sister Scarophia are Saradominist followers, and the Zamorakian Acolytes are Zamorakian followers.

In addition, the aesthetic of the buildings are of various religions as well; the Clan Wars building contains both Saradomin and Zamorak colours (blue/white and red/black carpets, suits of armour, and flags), the Last Man Standing contains Guthixian colours (green flames and barriers), while the chapel's altar, dedicated to Zaros, is maintained by Sister Scarophia, a Saradominist.

There are several features found within Ferox Enclave:

The immediate area around Ferox Enclave is designed to emulate the environmental experience in popular player-killing areas on PvP worlds.