The Ferox Enclave Dungeon is a dungeon beneath Ferox Enclave accessed by the staircase in The Old Nite pub. The dungeon is mostly inaccessible and there are no features except a portal leading to Soul Wars minigame. It is not considered part of the Wilderness and as such it is safe to enter.

The dungeon also features the inaccessible lobby of the Fist of Guthix minigame from RuneScape, as well as a ruined lobby of the Stealing Creation minigame, which can only be seen by players using an oculus orb.

Despite being in a free-to-play area the dungeons themselves are a members area. 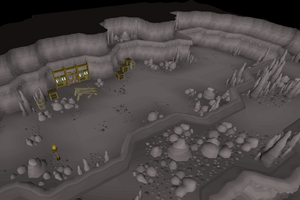 The entrance to the Fist of Guthix site.
Retrieved from ‘https://oldschool.runescape.wiki/w/Ferox_Enclave_Dungeon?oldid=14266608’
Categories:
Hidden category: