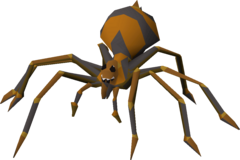 Fever spiders are Slayer monsters that require a Slayer level of 42 to kill, found only on Braindeath Island, in the brewery basement. This indirectly means players must also have started the Rum Deal quest in order to access them. Players must wear slayer gloves while fighting them, or face being damaged repeatedly and becoming diseased. Fever spiders are considered to be a relatively fast task due to the large quantity of spiders and their low Defence.

Players only need to wear slayer gloves if they are being hit by fever spiders, so players using Ranged or Magic could wear a better handslot item and make use safespots. A notable safespot is located in the south-west corner, where players can trap the spiders on the edges of crates. Players safespotting the spiders without wearing slayer gloves are advised to bring a Relicym's balm in case the player accidentally becomes diseased.

They are notable for dropping only one variety of herb, kwuarm.