Fight Arena is an experienced quest. The quest is started south of Ardougne by the titular Fight Arena by talking to Lady Servil.

To start the quest, talk to Lady Servil, located next to the north-west corner of the Fight Arena, which is by the north-east corner of the Tree Gnome Village maze. Ask her what's wrong, and she will explain that her family has been kidnapped by General Khazard because she refused his hand in marriage. Offer to help her.

The location of the chest containing the armour. 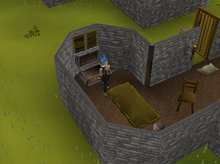 The chest containing the armour.

Walk east to a group of buildings located south of the local Monastery. The north-eastern-most house contains a chest which contains the Khazard armour, crucial to complete the quest. After equipping both pieces of armour, head to the prison, which forms the south and east boundaries of the Fight Arena.

Note: You are able to take multiple sets of armour using the drop and click method (dropping the armour then searching the chest again).

To save Lady Servil's family, you have to infiltrate the jail (south of the building with the chest). On trying to enter the prison, the door is locked, though the guards mistake the player as a Khazard Guard and let them in, as long as the player is wearing the Khazard armour retrieved earlier. Once inside, do not remove the Khazard armour as the guards will not speak to you without it equipped. You can wear anything else on you, as the guards are too daft to notice them.

Inside the arena[edit | edit source]

Items needed: 5 coins
A map of the Fight Arena.

Sammy Servil (the boy in the purple shirt) is located in the northernmost cell of the east wing of the prison. Ask him where the cell keys are, and he will explain the guard has them.

In the south-eastern corner of the jail, you will find a Khazard Guard by the staircase. Talk to the guard, and you will find out that he wants a decent drink, Khali brew, to be exact. He will also tell you that if he had too much, he would fall asleep. Be careful not to attack him by accident or you will need to wait for him to respawn again or get far enough to make him lose his aggression on you. (If you do attack the guard, you can go up the nearby staircase and back down to reset the guard's aggression)

You must talk to the guard before purchasing the brew, or the bartender will not offer it.

The only bar that sells the brew is the one west of the western entrance to the jail. Khali brew is sold for five coins. Once you have purchased the brew from the Khazard barman, head back to the arena and offer it to the guard, who will get drunk and hand you the keys.

Get out your combat equipment and prepare for three enemies you must fight in a row, although most players will find them relatively easy due to there being safespots.

Use the keys on Sammy's prison door to free him after which you and Sammy will enter the main arena in search of his father Justin, who is being attacked by a Khazard ogre.

Note: The dwarven multicannon cannot be set up in the arena.

To save Sammy's father, Justin, slay the attacking level 63 Khazard Ogre. You can lure the Ogre behind a skeleton and use Magic, Ranged or a halberd for an easy fight. Alternately, you can turn on Protect from Melee and melee it. If a fight sequence does not initiate, speak to Justin in order to continue. Note: If the fight sequence has already started, and you talk to Justin, a second Ogre will appear that you will have to kill.

General Khazard will then appear to tell you that in order for the Servils to be spared, you must become a fight slave. You will be locked in a prison cell. To continue in the quest, you must talk to Hengrad, your cellmate, to continue with the fights.

The second fight is with a level 44 Khazard scorpion. It's not poisonous, so another easy fight. It will be easily defeated by using the same tactics used to defeat the Ogre. 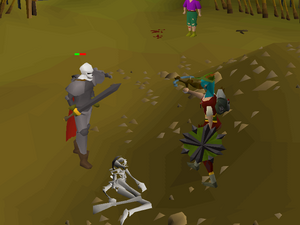 After defeating the scorpion, Khazard will release Bouncer (level 137). Bouncer is stronger than regular hellhounds, so do not underestimate him. You can once again use the safespot or alternatively you can melee him, Protect from Melee being rather helpful. If you do not have that prayer, bring high healing food.

Note: If you do forget to bring any ranged gear or food to help with combat, you are able to teleport out to gather items and return to continue the quest. When returning, speak to the Khazard Guard outside the by the door of the prison and he will take you back into the arena.

Once Bouncer is defeated, General Khazard (level 112) will become enraged at his only friend dying and will attack, trying to kill you himself. The Servils will escape whether or not he is killed; you do not have to fight General Khazard to claim the reward of the quest. You can simply walk out of the door, and once you have walked away, General Khazard will not pursue you. If you do decide to kill him, you can once again simply trap him behind a skeleton.

Note: If General Khazard kills you or you leave, you cannot re-enter the arena, meaning items left in the arena upon leaving it cannot be picked up.

After you exit the arena, return to Lady Servil to finish the quest and to get your reward. 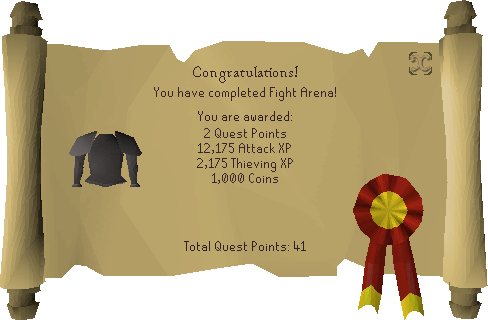 Completion of Fight Arena is required for the following: