The Final Pillar is a pillar found in the Temple of Light that is used during the Mourning's End Part II quest. During the light puzzle part of the quest, three beams of light of the correct colour must be directed to the correct sides of the end crystal to open three light doors that lead to the Death Altar.

The colours of the beams have to be targeted at the side of the pillar such that these two colours add up to white in the RGB colour model, as explained with the in-game colour wheel. This means: 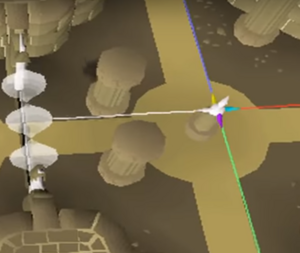 The final pillar has been lit correctly, and the light doors are opened.
Retrieved from ‘https://oldschool.runescape.wiki/w/Final_Pillar?oldid=14258516’
Categories:
Hidden category: