From Old School RuneScape Wiki
Jump to: navigation, search
The RuneScape Wiki also has an article on: rsw:Fire Warrior of Lesarkus

The Fire Warrior of Lesarkus is a temple guardian encountered while exploring during the Temple of Ikov quest. He guards a door leading to Winelda the witch.

When a player attempts to open the door, he will appear and demand to know their identity. If the player chooses to identify themselves as a humble pilgrim, he will comment that no pilgrims have been to the temple for thousands of years, and will tell the player that the temple is closed. Otherwise, if the player instead states that they are a mighty hero, he will become enraged and attack. He is level 84, and can only be defeated with ice arrows that are collected in the icy caverns within the temple. He uses fire-based magic attacks. If the player takes too long to kill him, he will simply disappear and the player will have to make him appear again.

Once he has been defeated, he will no longer spawn and the door can be passed freely. 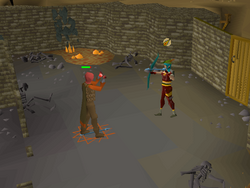 A player fights the Fire Warrior. 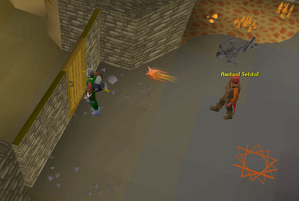