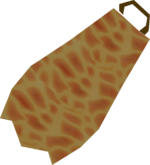 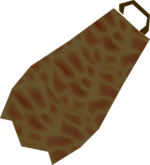 The fire cape is a melee cape obtained as a reward for completing the TzHaar Fight Cave. It is the second best melee cape in the game, outclassed only by the infernal cape. In order to obtain the fire cape, players must survive all waves of TzHaar Fight Caves and defeat TzTok-Jad. Note that the cape will not be awarded should both the player and TzTok-Jad die simultaneously, even though the boss log will count the kill. The player must be taken out of the cave by the game recognising TzTok-Jad's death; if they are removed from the cave due to dying, the game considers the player to have failed the challenge.

The fire cape is very popular for many forms of melee combat and is often the cape of choice, only surpassed by the strictly better, but much more difficult to obtain, infernal cape. In certain scenarios, other capes may be preferred for their higher accuracy bonuses, higher Prayer bonus, or for being easier to obtain or replace.

This item can be stored in the cape rack of a costume room. It can also be mounted on a cape hanger in an Achievement Gallery of a player-owned house. This has no effect other than showing the player's guests that the player has completed the Fight Cave.

Players who don't want their cape can sell it to TzHaar-Mej-Jal for their choice of a chance of obtaining the Tzrek-jad pet or 8,000 Tokkul. A lost fire cape can only be replaced by surviving the Fight Caves again to receive another one.

The fire cape can be combined with the max cape to change its appearance by turning it into the fire max cape.

The fire cape counts as warm clothing when fighting the Wintertodt.