From Old School RuneScape Wiki
Jump to: navigation, search
Not to be confused with Firepit. 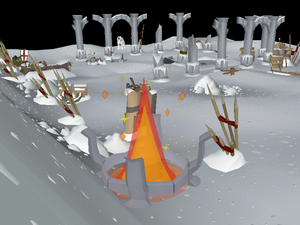 A fire pit with the Fire of Unseasonal Warmth lit.

Fire pits are interactive scenery in which special permanent fires can be lit using a combination of salts. These fires grant the player certain conveniences, such as being an inextinguishable light source, removing the need for a player to bring one themselves.

Fire pits can only be built and lit after the completion of the quest Making Friends with My Arm. Players cannot cook on these fire pits. There are six fire pits, initially labelled as old fire pits, that can be built and lit. A hammer, saw, and tinderbox are required to build at old fire pits. A crystal saw may be used. The old fire pit in the Falador Mole Lair also requires a spade and light source. Total materials needed to construct all fires are as follows:

This fire allows the Weiss herb patch to be used.

This fire prevents the swamp decay effect of the Mort Myre Swamp as well as preventing ghasts from rotting food in that area.

This fire prevents the Stat-draining effect of the area near God Wars Dungeon.

This fire cannot be built, but was the fire in Mother's arena during the quest.