Fireplaces are interactive scenery items found inside many buildings in RuneScape. The fireplace can be used like a camping fire to cook any meat, fish, or seafood and carries the same burn rate as a regular fire.

While the fire in the fireplace remains always lit, it does not allow players to bake or cook food that requires a range such as bread, stews, cakes, pies or pizzas due to the fact that it is similar to a normal fire. Players can also build a clay fireplace, stone fireplace, or a marble fireplace in their homes using the Construction skill at levels 3, 33, and 63 respectively, and can light them with logs and a tinderbox.

Fireplaces in a POH have the same function as a fireplace in a NPC's house. However, the fireplaces can be upgrade from a clay fireplace to a stone fireplace, and eventually a marble fireplace. The construction level required for each is 3, 33 and 63 respectively. Also, using logs on a POH fireplace grants Firemaking experience equivalent to normally burning the logs, but the fire lasts longer. Amid speculation, a log burnt in a fireplace does not reduce the chance of burning food.

Fireplaces may be built in several rooms of a player-owned house, as used in the Construction skill: 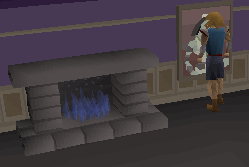