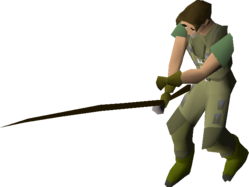 The Fisherman is a professional angler who has been granted permission to fish for anglerfish in Port Piscarilius, located near Tynan's Fishing Supplies.