Fishing is a skill which involves catching fish from selected spots around Gielinor. Higher Fishing levels enable different mechanisms of Fishing, the ability to catch a larger selection of fish and increases a player's catch rate. Caught fish may be cooked through the Cooking skill to create food which may be used later to regain hitpoints during combat. Alternatively, many players sell their excess stock of catches for gold.

When a player catches most fish, they will be raw and cannot be eaten until they are cooked. The name and colour indicates this. For example, when shrimps are first caught they are named "raw shrimps", but once cooked the name changes to "shrimps".

Clue in a bottle[edit | edit source]

Locations of fishing shops where players can buy supplies are: 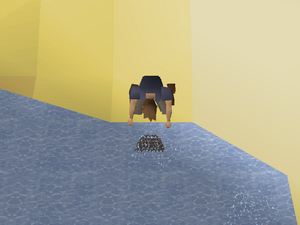 A player fishing on a fishing spot.

The first few fish players can catch require nets. Fishing nets can only be used in the seas. Players can use small fishing nets and big fishing nets. The big nets only allow players to catch different types of fish and sometimes items, such as caskets. When a player has found a fishing spot, they can then use their net if the option "net fishing spot" is available. "Net fishing spot" can be found in: Draynor Village, Lumbridge Swamp, Musa Point, the coastline near Rimmington, the Wilderness Bandit Camp, Al Kharid, and Corsair Cove. 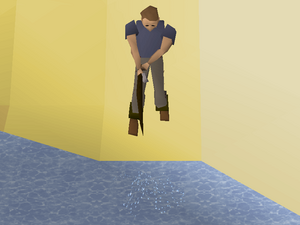 This player is using a fishing rod.

Fishing rods are required for mid level fishing. Rods can be used in both rivers and seas. Along with a fishing rod, players also need bait. Bait can be bought in stores (3 coins each at the Port Sarim fishing shop), but is also dropped by some monsters and random events. When a player has found a fishing spot, they can then use their fishing rod if the option "bait fishing spot" is available. For every fish you catch, you lose one piece of bait.

There is also an oily fishing rod. However, only members can use this rod. It is required to catch infernal eels when used with ice gloves. It is also required to catch lava eels and is needed in the Heroes' Quest.

Fly fishing rods are also required for mid level fishing. These rods can only be used in rivers. Along with a fly fishing rod, players also need feathers. They can be bought from the Shilo Village and Port Sarim fishing shop, but are also dropped by chickens. When a player has found a fishing spot, they can then use their fly fishing rod if the option "lure fishing spot" is available.

Stripy feathers (introduced with the Hunter skill) can be used for fly fishing, as well. Those feathers work the same as normal feathers, but players will only be able to fish rainbow fish, rather than the usual trout and salmon. 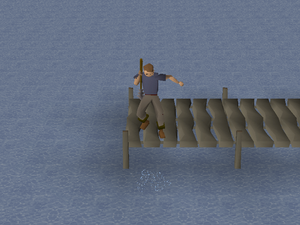 This player is using a harpoon to fish.

After being taught by Otto Godblessed, a player can catch fish that are harpoonable with just their hands. The fishing level requirement is 20 levels higher and it also requires a Strength level equal to the fishing level needed to catch the fish normally, but a small amount of strength experience is gained and the player doesn't need a harpoon equipped or in their inventory. 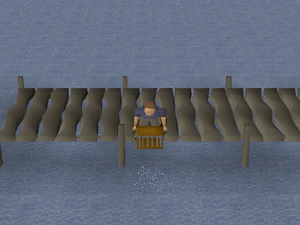 This player is using a lobster pot to catch lobsters.

Lobsters are caught in the sea by using lobster pots. When a player has found a fishing spot, they can then use their lobster pot if the option "cage fishing spot" is available. This is also true for Dark Crabs, with the only exception being Dark Fishing Bait must also be in a player's inventory.

Members with level 48 in Fishing can speak with Otto Godblessed in his home near Baxtorian Falls to learn special barbarian methods of fishing. First, he instructs the player on heavy rod fishing. Heavy rod fishing requires a barbarian rod (found under Otto's bed) and any type of bait (except for stripy/coloured feathers), as well as a knife to gut the fish. In order to catch the special fish in Otto's lake, a Strength and Agility level is needed in addition to the fishing requirement. The leaping fish obtained can be used with a knife to obtain roe and caviar for use in the Herblore skill, and catching them gives small amounts of experience in Strength and Agility.

Obtained through the Fishing trawler minigame and Aerial fishing, pieces of the Angler's outfit grant a bonus to fishing XP gained, increasing to 2.5% with the full outfit.

Tempoross is a Fishing-based skilling boss found at the Ruins of Unkah. Players need at least level 35 Fishing to help participate. World 341, 422, 463 and 531 are the Old School RuneScape designated Tempoross worlds. Players board the boat on the dock to sail to an island in order to help subdue Tempoross. In order to subdue Tempoross, players must catch, cook and fire harpoonfish using the cannons provided. This will cause Tempoross to submerge in the centre of the island, where it can then be attacked, allst while dodging Tempoross' attacks. Players must be careful not to let Tempoross get too enraged as it'll wash them off the island. Defeating Tempoross, whether it be by yourself or in a group, will grant Fishing experience and reward permits that can be stored at the reward pool. Rewards such as cosmetic overrides and a variety of useful Fishing items, e.g. fish barrel or a tackle box can be obtained by fishing out of the reward pool.

Fishing Trawler is a Fishing minigame run by Murphy that players can play at Port Khazard. Players need at least level 15 Fishing to participate. Players board a trawler boat and work as a team to prevent the boat from sinking as they are sailed for 5 minutes around the sea. It can be overwhelming for a single player, so it is recommended to participate in a group. World 370 is the Old School RuneScape designated Fishing Trawler world. If the trawler net is not ripped by the end of the trip, players may receive saltwater fish up to their Fishing level and other assorted items (i.e. rusty swords). The Fishing Trawler is the one of the only methods in which you are able to catch sea turtles and manta rays. Players have a 1/12 chance to receive a piece of the Angler's outfit and a 1/5,000 chance of receiving the heron pet.

Upon completing any of the following quests, players may choose to allocate experience to Fishing. These rewards usually come in the form of items, such as lamps or books, and are independent of any experience rewards directly received for completing the quest.