Fishing Contest is a quest in which the player has to earn the friendship of two dwarven brothers by securing a fishing trophy for them. Afterwards, they allow the player to use the dwarven passage underneath the mountain.

{"requirements":"*<span class=\"scp\" data-skill=\"Fishing\" data-level=\"10\">[[File:Fishing icon.png|21x21px|link=Fishing|alt=Fishing]] 10 [[Fishing]]</span> <sup>(<span title=\"This requirement is not boostable\" style=\"cursor:help; text-decoration: underline dotted;\">not boostable</span>)</sup>","desc":"The mountain Dwarves' home would be an ideal way to get across White Wolf Mountain safely. However, the Dwarves aren't too fond of strangers. They will let you through if you can bring them a trophy. The trophy is the prize for the annual Hemenster fishing competition.","difficulty":"Novice","kills":"None","name":"Fishing Contest","start":"Dwarves at the entrances to the tunnel that goes under [[White Wolf Mountain]].","length":"Very Short","items":"*5 [[Coins]] (10 if you buy a [[Fishing rod]] from Jack)\n*[[Fishing pass]] (obtained during quest)\n*[[Garlic]] (obtainable during quest)\n*[[Fishing rod]] (obtainable during quest), [[Oily fishing rod]] does '''not''' work\n*[[Spade]]\n*[[Red vine worm]] (obtainable during quest)"}

This quest can be started from either side of the White Wolf Mountain.

To start this quest, go to either of the quest start points adjacent to White Wolf Mountain, as shown in the picture. The western quest start point is closer to the next part of the quest, so it is recommended. Attempt to walk down the stairs in the building and a nearby dwarf will block you from doing so, saying that the tunnel is only for the use of the Mountain Dwarves. (Alternatively, talk to the dwarf and ask about what is down the stairs.)

Ask the dwarf if you could become friends ("If you were my friend I wouldn't mind it" ..."And how am I meant to do that?"). The dwarf will say that he wants you to win the fishing contest in the western town of Hemenster, since the reward for the contest is a coveted gold trophy and dwarves aren't known to be good at angling.

They'll give you a fishing pass for entry into the contest, before promising you access to the tunnel shortcut underneath the mountain, should you manage to be successful.

Help from the champion[edit | edit source] 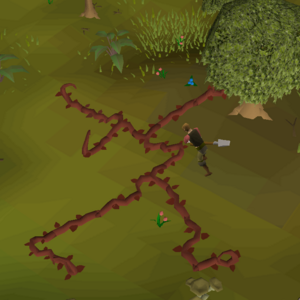 Note: fairy ring code als will place you in McGrubor's Woods, and will also complete a medium Kandarin achievement.

Once there show Morris your fishing pass and he will let you in.

Put the garlic into the pipes on the south wall of the north building by the Sinister Stranger. Garlic can be found in the house with a quest symbol and cooking range symbol in the centre of Seers' Village. Pay Bonzo the contest fee to start the contest (5 coins). The Sinister Stranger will complain about a horrible smell and you will change places with him. 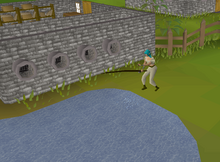 Fishing next to the pipes.

Fish at the spot by the pipes using the red vine worms. You will catch a giant carp, a unique type of fish that you can't catch normally, and that will be the prize winning fish.

Speak to Bonzo again and hand over the giant carp. You will be announced the winner of the Fishing Competition.

After winning the contest and obtaining your trophy, head back to the quest starting point on either side of the mountain and give the dwarf your trophy. 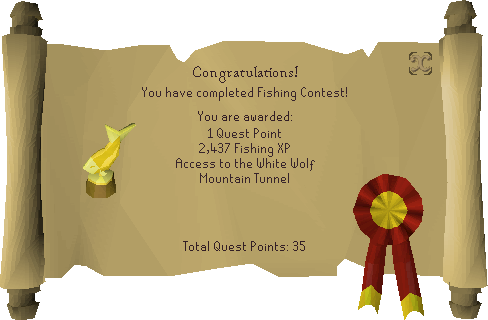 Completion of Fishing Contest is required for the following: