The Fishing Guild is a members-only guild located in a fenced area north of East Ardougne; west of Hemenster, which was released on 17 June 2002. To enter, players must have a Fishing level of 68; boosts from fishing potions, fish pies and the Dragon harpoon special attack (all provide +3 Fishing boost), admiral pies (+5 Fishing boost), or brown spicy stews (-5 to +5 range of Fishing boost) can be used to boost one's level in order to enter the guild, making the lowest level to possibly enter 63.

Aside from Catherby, the Fishing Guild is one of the most popular places to fish because of the nearby bank.

Outside of the guild is the Master Fisher. You can talk to him to receive fishing advice or to get a Fishing cape for 99,000 coins. You can also trade with him; he sells fishing bait, feathers and fish.

While inside the guild, players will receive an invisible +7 level boost to their Fishing. This boost will stack with any existing boosts the player already has, such as the visible +3 boost from using the dragon harpoon's special attack, though visible boosts are capped to level 99.[1] However, the invisible boost will not allow a player to perform actions above their base level.

The fishing guild is located south-west of Seers' Village and north of Ardougne. There are several transportation options

Here is a range, which you can use to cook food. It is fairly close to a bank, but there is an everlasting fire directly next to the bank in the Rogues' Den. A lobster pot, harpoon, and fishing net spawn here. There is also a ladder here, but there's nothing important up the ladder.

You can access your bank here. It is connected to the fishing store. Notably, this is the closest bank to shark and lobster fishing spots. The bank is also a location used in Treasure Trails. Blowing a raspberry whilst completing a hard clue scroll causes a double agent to appear. This near immediate access to a bank makes the Fishing Guild brilliant for profit and experience alike.

There is a Fishing Guild Shop run by a man named Roachey. He has a supply of fishing bait (3 coins each) and feathers (2 coins each).

He will buy and sell player-stocked raw or cooked cod, mackerel, bass, tuna, lobster and swordfish.

The guild is ideal for players fishing sharks, lobsters, tuna, and swordfish. The proximity of a bank and a range allows almost non-stop fishing, making it a great place to train. 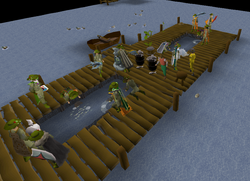 A group of players on the platform fishing minnow.

In the northern platform, players can speak to Kylie Minnow, who will take players to a platform containing minnow. To access this platform, players require level 82 in Fishing, completion of the Fishing Contest quest, and have an angler's outfit worn while speaking to her.

A flying fish gobbles up the player's minnow.

The platform contains four minnow spots, where they move 1 tile in a clockwise direction every fifteen seconds, meaning players must pay more attention to fishing minnow compared to other fishing methods. In addition, there is a chance a flying fish will eat some of the player's minnow, forcing players to move to another minnow fishing spot. Flying fish will only appear when the spot is first clicked. Therefore, when any player is already receiving minnows from a fishing spot there is no risk of a flying fish appearing for anyone on that spot until it moves.

The platform is not considered within the guild and thus does not benefit from the guild's invisible level boost.

For every forty minnow caught, Kylie will exchange them for one raw shark.