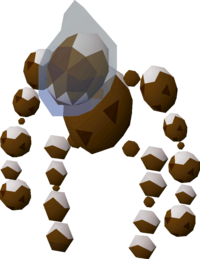 Flambeed is the second boss in the Recipe for Disaster quest. He is similar to the boss Fareed from Desert Treasure. He attacks using fairly strong melee attack and close-range Magic. Players are advised to wear ice gloves while fighting him as when he lands a hit on the player, if they are not wearing ice gloves, their weapon will be unequipped. Flambeed is weak to Water spells, melee attacks (especially crush) and Ice arrows.

A popular way to defeat him is to use Snare/Entangle and proceed to cast Water Blast/Wave while maintaining distance. A yew/magic shortbow can also be used with Ice arrows in place of Water spells. This method works effectively if the player does not have ice gloves as they will hardly be under attack, alleviating Flambeed's ability to disarm the player. If melee is used, a strong crush weapon such as a godsword or Zamorakian hasta is recommended as well as wearing ice gloves, since melee users will be constantly hit.

It's rare but possible for him to spawn inside one of the portals. If this happens, he will be unable to move and players can safely attack him from a distance.