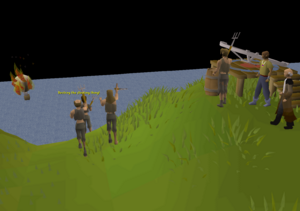 The Flash Mob is an angry mob that appears on Entrana during the Enlightened Journey quest.

According to Auguste, the Flash Mob was placed on Gielinor by the gods to ensure that technology never advanced too far. During the quest, the flash mob destroys the players' origami balloon because they fear it is too advanced. However, the factuality of this is doubtful as they are not seen anywhere else, and was most likely just a joke by Jagex.