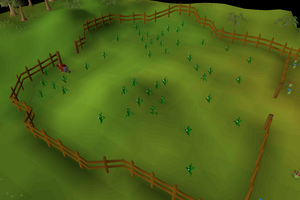 A flax field is a location where many flax plants are located together. Each of these spots has a random number of flax, and a flax spot disappears when all the flax in that spot is picked. They reappear later after approximately five seconds in the same spot. They can be picked by members, and may then be spun into bow strings. This gives 15 Crafting experience.

Currently, there are five flax fields located in Gielinor. 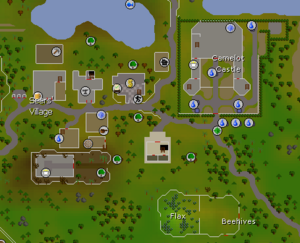 A map of the popular Seers' Village flax field.

The first flax field is an area next to the beehives where the player can pick flax. There is also a building with a spinning wheel to the west where players can spin the flax into bow strings. It is just south of Seers' Village and west of Catherby. Although now flax sells for about 4 coins each, it was a popular area with players picking flax (amassing as much as 1000 flax per hour) as an early temporary moneymaker as flax sold for about 100 coins back then, which led to many bots exploiting the area. After completion of certain difficulties of the Kandarin Diary, the flax keeper will exchange noted flax daily for noted bow strings.

There is also a second flax field in the elven town of Lletya. It contains less flax than the location at Seers' Village, but this flax field lies closest to a bank. Players need to have the quest Regicide done to pick flax here.

A third flax field that can be found in the south-east region of the Tree Gnome Stronghold—it contains lots of flax spread throughout the area. Spinning wheels can be found nearby. A bank can also be found north-west of the area.

Some flax herbs can be found on Lunar Island—it contains a low amount of flax, and it is spread out over the south part of the island, on the way from the city to the Astral Altar.

Some flax herbs can be found south of Rellekka—it contains a low amount of flax, and the only bank option is Peer the Seer provided that players have not completed The Fremennik Trials quest or have completed the easy Fremennik Diary.