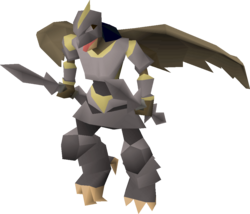 Flight Kilisa is one of the aviansie bodyguards of Kree'arra, along with Wingman Skree and Flockleader Geerin. She uses melee attacks with a max hit of 15 hitpoints.

She is widely regarded as being the most problematic of the three bodyguards, as Ranged armour provides only a mediocre amount of protection against her slash based melee attacks. Fortunately, in a team setting, she switches targets often, and as a result spends a significant portion of time traversing between players as she attempts to reach the melee distance of her new target. As such, having players distant from each other would minimise the threat Flight Kilisa poses.

The ability to be assigned aviansies by Konar quo Maten, Chaeldar, Nieve, and Duradel can be purchased for 80 slayer reward points, which allows the use for the bonuses of the slayer helmet (i).

Drop rates estimated based on 35,963 kills from the Drop Rate Project, unless otherwise cited.