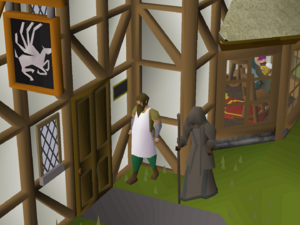 The Flying Horse Inn is a bar found north of Ardougne Castle, in the north-western parts of East Ardougne. The bartender sells beer to thirsty adventurers for two coins per pint, and there are several small rooms to rest in upstairs (though these are non-functional).

Lucien can be found standing outside the inn as the start point for the quest Temple of Ikov.

The Flying Horse Inn is featured in Alfred Grimhand's Barcrawl miniquest, where players can purchase a Heart Stopper.

You can also find Two-pints at the Flying Horse Inn. She is the taskmaster for the Ardougne Diary.