From Old School RuneScape Wiki
Jump to navigation Jump to search
The RuneScape Wiki also has an article on: rsw:Forgettable Tale...

Forgettable Tale of a Drunken Dwarf is the second quest in the Rise of the Red Axe quest series, in which you must track down clues to find the truth behind the Red Axe corporation. It is the sequel to The Giant Dwarf quest.

{"requirements":"*<span class=\"scp\" data-skill=\"Cooking\" data-level=\"22\">[[File:Cooking icon.png|21x21px|link=Cooking|alt=Cooking]] 22 [[Cooking]]</span> <sup>(<span title=\"This requirement is boostable\" style=\"cursor:help; text-decoration: underline dotted;\">boostable</span>)</sup>\n*<span class=\"scp\" data-skill=\"Farming\" data-level=\"17\">[[File:Farming icon.png|21x21px|link=Farming|alt=Farming]] 17 [[Farming]]</span> <sup>(<span title=\"This requirement is boostable\" style=\"cursor:help; text-decoration: underline dotted;\">boostable</span>)</sup>\n*Completion of the following quests:\n**[[The Giant Dwarf]]\n**[[Fishing Contest]]","desc":"Forgettable Tale of a Drunken Dwarf is part 2 in the [[Rise of the Red Axe]] series, focusing on the dwarves and their capital city of [[Keldagrim]]. After the events in [[The Giant Dwarf]], the [[Red Axe]] mining company has departed the city and set up a new headquarters in a remote underground location.\n\n[[Veldaban]], the Commander of the [[Dwarven Black Guard]] in [[Keldagrim]], wants you to investigate the case and find out if the [[Red Axe]] is planning anything nefarious. The problem is, the only lead he's got is an extremely drunken and kebab obsessed dwarf.\n\nUse your farming and brewing abilities to your advantage, then prepare to be perplexed by puzzles as you follow the trail to the [[Red Axe]]...","difficulty":"Intermediate","kills":"None","name":"Forgettable Tale...","start":"Talk to Commander [[Veldaban]] in the [[Dwarven Black Guard]] headquarters in [[Keldagrim]].","length":"Long","items":"*~400 [[coins]]\n*2 [[barley malt]] (no range in Keldagrim, plain barley has to be cooked elsewhere)\n*2 [[buckets of water]]\n*[[Spade]] (no [[Tool leprechaun]] in [[Keldagrim]])\n*[[Seed dibber]] (no Tool leprechaun in Keldagrim)\n*[[Rake]] (obtainable during the quest)\n*[[Ale yeast]] (or a [[Pot]] (obtainable during the quest) + 25 coins)\n*[[Kebab]] (buy during quest for 1 coin)\n*3 [[beer]]s (buy during quest for 1-2 coins each)\n*[[Dwarven stout]] (obtainable during the quest)\n*[[Beer glass]] (obtainable during the quest)\n*A random item off the list below (see list for details)"}

Note: This quest involves waiting for 15-20 minutes twice. If you don't want to do this quest intermittently, you can bring something to fill this time with, such as runes and items for High Level Alchemy. For the first waiting period there is a bank nearby.

Items required: Beer (or 2 coins to buy one)

Head to Keldagrim. A great way to get there is by using the Grouping teleport to Blast Furnace. Another great way is to use the cart trapdoor in the north-western part of Grand Exchange. The fairy ring code dks will bring you right next to the entrance to Keldagrim. There are also cart rides from the Dwarven Mine, the underground White Wolf Mountain passageway, and Dorgesh-Kaan (if you completed the quest Another Slice of H.A.M.).

To start this quest, talk to Veldaban, Commander of the Black Guard in the Black Guard H.Q., west of the Keldagrim bank. He is rather shocked to tell you that, after the incident at the end of The Giant Dwarf, the Red Axe company has left Keldagrim and will soon be kicked out of the Consortium.

However, he finds it rather suspicious and wants you to investigate the mining group. The only lead they have currently, is a dwarf living in east Keldagrim who expresses strange behaviour when the company is mentioned.

Agree to help Veldaban, and you will automatically be transported to the dwarf's house in east Keldagrim after a short cutscene. Speak to the dwarf, who is rather drunk and will ask you for a drink. Talk to him to give him the beer. Beer can be bought in the Laughing Miner or the King's Axe Inn for two coins. He, however, wants "some of the REALLY good stuff", which is an incredibly alcoholic drink called Kelda stout.

Getting the seeds[edit | edit source]

To make the drink, you need to grow some kelda hops from 4 kelda seeds, possessed by some of his drunken friends - namely Khorvak, Gauss and the rowdy dwarf. 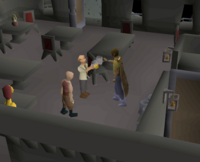 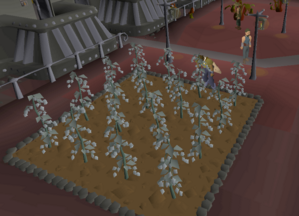 Once you have all four seeds, go to the hops farming plot in front of the palace in West Keldagrim and east of the bank. Ask Rind the gardener for advice on planting the seeds, and he will explain that sunlight is harmful for kelda seeds and hence you can only grow it underground. He then gives you permission to use the Kelda hops patch. Pick up the rake to the south if needed.

Weed the garden using a rake, plant the hops, and wait 15-20 minutes. You don't have to be online, but logging in and out will reset the timer. You'll get a notification when the hops are ready saying: Perhaps I should take a look and see if my Kelda hops have grown... The hops don't require attention or water and cannot get diseased, as they are known for having a remarkably fast growing speed.

If you need something to pass the time, you can talk to Rind the gardener and deliver a letter for him; you must take it to Elstan, the gardener at the allotment south of Falador (you can quickly reach him using the cabbage port from the Explorer's ring 2, 3, or 4), then go back to Keldagrim to Rind to get two marrentill seeds.

When your seeds have grown, pick the Kelda hops.

You now need to head to the bar in East Keldagrim and up the stairs to the fermenting vat. The vat at Port Phasmatys cannot be used; the vat will give the message, "These special hops need to be brewed in the Keldagrim brewery. Oh well..." If you already have contents in the fermenting vat bring 8 beer glasses or 2 calquat kegs to empty them. If the contents are still fermenting you can drain the vat by using the valve (whatever contents were fermenting in this vat will be lost).

If ready to brew the ale, use two buckets of water on the vat, then add two barley malt, then the kelda hops. If you didn't bring ale yeast, take the pot from the nearby table and ask Blandebir to fill it up with ale yeast for 25gp. Use the ale yeast on the vat and the fermenting process will begin. This will take another 15–20 minutes and you will get a notification when it's ready.

When it's done fermenting, turn the valve (behind the barrel) and use a beer glass on the barrel. Head to the Drunken Dwarf's house just north and talk about the Red Axe. He will ask for the Kelda stout and then tell you about the boarded up tunnel along with a small cutscene.

Items required: None, Empty weapon and shield slot (You need both hands free)

Cart Conductor and the blocked passage

Talk to the cart conductor to the south at the train cart tracks (only one of the conductors will give you the option to ask about the closed off tunnel, which would be the one furthest south, nearest to the closed off tunnel). Now, talk to the director of the mining company that you joined during The Giant Dwarf quest, which is located upstairs in either the west or the east marketplace. Ask them for help with the boarded up tunnel, and they will have the boards removed at once. Go back to the conductor and ride the cart that goes into the new tunnel (the most southern cart, no ticket required).

You will find yourself before a gigantic abyss at the end of the cart ride. A short cutscene shows the vastness of the area, along with tracks floating out in all directions.

If you log out at anytime while in the cave, you will be transported out in the city, and your progress will be saved.

To proceed, you will need to head through one of the many exits on the other side of the chasm. First, you need to solve a puzzle to set the tracks to the exit. Collect the square stones from the box next to the controls, and set them in the dwarven machinery. A green stone will make the cart take the top path at a junction, and a yellow stone will make it take the bottom path.

Your goal is to set up a connection between the red square all the way to the left and the boxes that are to the right. To place/rotate a stone in a junction, click once for green, twice for yellow, and three times to remove the stone. The green line shows the path the cart will take. 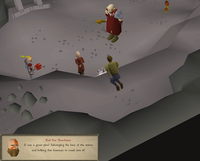 In this room, you eavesdrop on a conversation between Hreidmar (the Red Axe Director), an Ogre Shaman, and a Red Axe Henchman discussing their plans. You learn that The Red Axe bribed the boatman into deliberately crashing into the statue so that they could blame it on a human in The Giant Dwarf quest. Crawl through the hole at the opposite end of the room from where you entered.

You'll now be in another minecart abyss. Search the box to receive two yellow and one green stone.

You appear in a small archive room, with a number of bookcases and crates, the ones with visible contents being searchable. Search the three crates. One contains papers concerning statistical data, salary structures, and shopping lists. The other two, however, are much more interesting. YOU MUST ALSO SEARCH A BOOKCASE BEFORE MOVING ON.

Moving forward from the reports room, you arrive at the final chasm. Search the box for two yellow and two green stones. 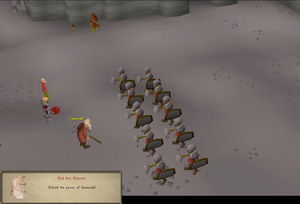 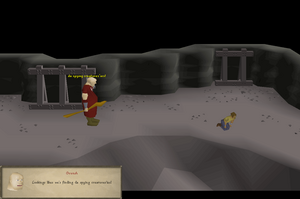 The shaman casts a memory-erasing spell.

A cutscene starts, where the Red Axe Director will show off his army of Chaos Dwarves. But, before you can report to Commander Veldaban of what you've seen so far, Grunsh the Ogre shaman catches you prying into their plans and casts a spell that eliminates all your memories of the caves.

Go back and talk to Commander Veldaban, where you began the quest. (Note: Drinking the beer/eating the kebab before talking to Commander Veldaban will not initiate the cut scene.) You won't remember any of what had happened, but your instincts will tell you to go to the Laughing Miner pub in east Keldagrim and have a beer and kebab. Buy a kebab from the store on the east side (directly south-west of the drunken dwarf's house) and a beer from the pub. Now, drink the beer/eat the kebab in the east pub to begin the final cutscene. You will get drunk and tell a nonsensical story to a bunch of drunken dwarves. 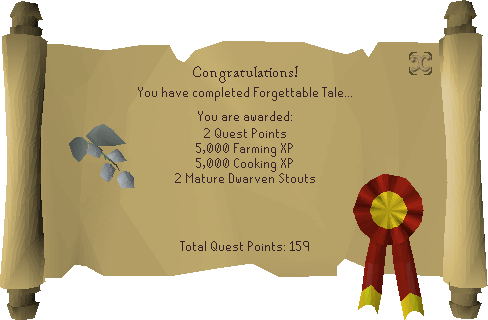