Fossil Island is a members-only area located north-east of Morytania and unveils a unique environment where players can train a variety of skills. It is an ancient, uncharted island currently being explored by the Varrock Museum.

The island itself is surrounded by seven other smaller islands, though they are currently inaccessible save for Lithkren, the island north-west that players visit during the quest Dragon Slayer II.

In order to reach the island, players must have completed the Bone Voyage quest, which requires at least 100 kudos.

Initially, Fossil Island may be reached via the ferry from the digsite, which is close to the Varrock Teleport.

The fastest way to travel to Fossil Island is to use a digsite pendant, which will teleport the player near the barge at the digsite, where they can fast travel by speaking to the barge guard. 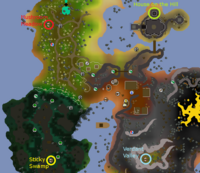 A map showing the locations of the magic mushtrees.

The digsite pendant can be used on the southernmost strange machine inside the House on the Hill, north-east of the Museum Camp, which will unlock an option on the pendant to teleport to the House. Inside this house, there is also a Magic Mushtree, which unlocks the Mycelium Transportation System. This system of Magic Mushtrees allow transportation around Fossil Island, but in order to access them, they must be discovered by walking to their locations first and attempting to use them.

If you don't have a digsite pendant, another fast way to get to Fossil Island is to use the Glider transportation system along with the Spirit Tree transportation system. From Varrock, use the spirit tree in the Grand Exchange to teleport to the Gnome Stronghold. From there, climb up the tree and use the Glider to 'Lemanto Andra', shown as a castle on the popup map. This will take you very close to the digsite, and the boat that ferries you to Fossil Island. Alternatively, you can use a ring of dueling to teleport to PvP Arena and use the gnome glider just west of the gem trader in Al Kharid, or use fairy ring code aks and run west to the gnome glider after One Small Favour. 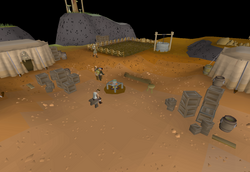 After arriving on Fossil Island, the player will be just west of the Museum Camp. At first, the camp will not be very useful, but players can utilise their Construction skill and some materials to build improvements within the camp. Building the utilities requires a hammer. If you've forgotten a hammer, you may purchase one from the general store.

In total, players will need the following items to build everything: 10 oak planks, 2 iron bars, 25 nails, 1 tinderbox, 2 logs, 3 soft clay, 1 bucket, 2 ropes, and 5 planks. A hammer and saw (crystal saw won't work) are also required. The list of things to build can be found further below in the Mini-Task List section. You will also need at least 29 Construction to build everything.

Players can find Fossil Storage to store any fossils found whilst on the island. There are additional storage crates scattered around the island as well, and another one is in the Varrock Museum basement.

The north-west section of the island is the Mushroom Forest. There are various activities here that allow players to train a variety of skills. Players can slay Ancient Zygomites as part of a Zygomite Slayer task, track down herbiboars throughout the Forest, plant teak and mahogany trees in the three tree patches in the south-east corner, and calcify fossils in the mycelium pool.

In addition, the Wyvern Cave can be found in the Mushroom Forest, beneath a trapdoor. The wyverns within can only be slain if players have been assigned Fossil Island Wyverns as a slayer task. 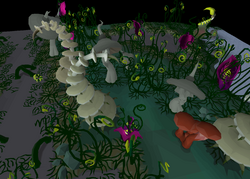 The south-west section of the island contains a large swamp. Travelling through the swamp requires a rake to clear vines in addition to an axe to chop down thick vines. Sulliuscep mushrooms can be found throughout the swamp, but only one can be chopped down, forcing players to traverse the hostile swamp, while avoiding aggressive Tar Monsters, to find the choppable sulliuscep.

In the southern end of the swamp, players will find the Deranged archaeologist, who fights similarly to the Crazy archaeologist found in the Wilderness ruins. However, he is much more dangerous, as his special attack can hit for 56 damage.

The volcano can be found on the south-east side of the island. Many ash piles can be found here, along with the Volcanic Mine. 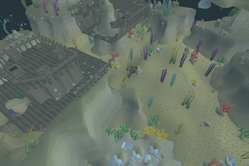 The underwater area beneath Fossil Island.

Beneath the waters of Fossil Island lies a large underwater area that can be accessed by using the rowboat at the north-east corner of the mushroom forest — travelling out to sea with the rowboat brings the player to a small island with a bank chest, where they can then travel back or right click on the rowboat to enter the underwater area.

Unlike other underwater areas throughout the game, a small bar indicating the player's oxygen level will appear at the top left of the game screen when they enter the area. This bar will continually drain while the player remains underwater - if it runs out, players will drown and reappear at the surface. You can refill your oxygen by collecting pufferfish, which can be consumed to refill your oxygen. However, if the player has a fishbowl helmet and diving apparatus equipped, their oxygen level will stay at 100%. The helmet and apparatus can be safely removed and re-equipped while underwater, and if you have an oxygen level below 100%, it will slowly fill back up once both items are re-equipped.

House on the Hill[edit | edit source]

Main article: House on the Hill 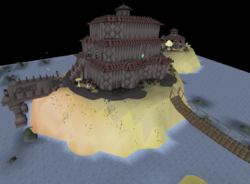 The House on the Hill, an ancient dragonkin structure.

Located on the north-east side of the island, the house on the hill can be travelled to by climbing a hill on the south end of the mushroom forest. Located within the house on the hill are various strange machines, one of which can enchant a digsite pendant to allow players to teleport directly to the House. In addition, one of the four magic mushtrees on the island can be found here, allowing quick access to other parts of the island by teleporting here via digsite pendant, then using the magic mushtree to travel. 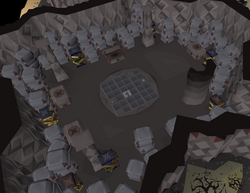 The house's basement. In the centre lies a strange grid with missing pieces.

In the basement of the house, accessible via a trapdoor in the south-east corner, there are several stone chests with a search option. Searching the stone chest will ask for a numulite. After inserting the numulite, the chest will give the search option to insert 100 numulites into the hole. The chests have a chance of having nothing happen, dealing damage, or giving one of various notes. The notes can be added to the player's Fossil Island note book. In addition, behind the ladder, a pile of books can be searched to obtain an ancient diary.

Just outside the Fossil Island General Store in the Museum Camp is a notice board which lists things to do on Fossil Island. These are simple mini-tasks which are meant to introduce the player to the various content the island has to offer. The list is split into four sections: the Museum Camp, the Northern Reaches, the Southern Swamps, and the Mountainous East.

Players who have completed a section of the list can speak to Peter, who can be found panning south-west of the notice board, for a reward. Players who complete the list for the Museum Camp and Northern Reaches will receive 10 unidentified small fossils (5 per section) and completing the list for the Southern Swamps and Mountainous East will give 10 unidentified medium fossils (5 per section). 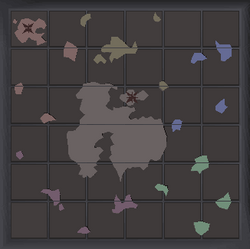