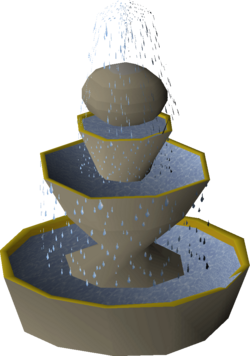 A map of the Heroes' Guild showing the location of the Fountain of Heroes.

The Fountain of Heroes is in a small side passage near the runite ore rocks in the dungeon of Heroes' Guild. If players use an amulet of glory on the fountain, all amulets of glory that they have in their inventory or equipped on their character are recharged. Each has its four teleport charges and its 40% greater chance of getting gems while Mining restored. Amulets can be recharged even if they are not completely uncharged.

There is also a passage that leads back to the ladder once accessed that requires the completion of the hard tier of the Falador achievement diary as well as 67 agility.

Note: Fountain of Heroes will not recharge noted amulet of glories.