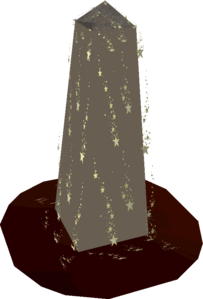 13 March 2014 (Update)? (edit)? (edit)NoNoSouth of the Wilderness Volcano? (edit)Magical energy, accumulated under the Wilderness for aeons, gushes forth.

The Fountain of Rune is a magical rock found within the ruined fortress south of the Wilderness Volcano. Having emerged from an underground tremor that caused it to erupt from the earth, the Fountain provides unlimited runes when casting a spell within its vicinity, consuming no runes, but no experience will be gained for doing so. Although free players can visit the Fountain, all its features are only available to members.

Teleportation spells can be active whilst near the Fountain, but as it is in deep Wilderness, they cannot be used to teleport out of the Wilderness.

A player teleporting to the Fountain of Rune.

Members can charge their dragonstone jewellery (Amulet of glory, combat bracelet, skills necklace, ring of wealth) on the Fountain of Rune, provided they have the quest requirements to do so normally. There are no quest requirements to recharge rings of wealth, but recharging amulets of glory requires the completion of Heroes' Quest, and recharging skills necklaces and combat bracelets require the completion of Legends' Quest. Upon charging a piece of jewellery on the Fountain of Rune, the piece will receive six charges, rather than the typical four charges from the jewellery's traditional charging location. A player only needs to use a single piece of jewellery on the Fountain of Rune and all the jewellery in their inventory and that they have equipped will be recharged at once.

The Fountain of Rune is the only location where the ring of wealth can be recharged. Each ring receives five teleport charges.

In addition, while charging amulets of glory, there is a 1 in 25,000 chance that an amulet of glory (including its trimmed variant) will transmute into an amulet of eternal glory, which provides unlimited teleports rather than the usual six. When this occurs, "The power of the fountain is transferred into an amulet of eternal glory. It will now have unlimited charges." will appear in the chatbox, replacing the Fountain of Rune's standard message for charging jewellery.