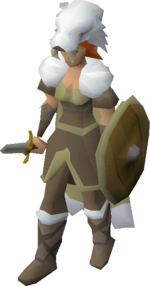 Freja is an adventurer and member of the Myths' Guild. She is located at the centre of the guild on the ground floor[UK]1st floor[US].

She comes from the Fremennik Province and gained entry to the guild by slaying a great Smolodin Kyatt which plagued her province for many years, retrieving the crown of many heads from the snake pit, and hunting the silver stag of the western provinces. She tells the player she's currently on a quest to slay a famous Boar in the northern territory of Acheron.

Using the book Imcandoria's fall on her will reveal that the book was written by her, in which she transcribed and translated the original from texts inscribed in rock paper from an extremely heavy tome.