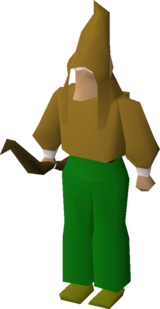 G.L.O. Caranock is the Gnome Liaison Officer for the Karamja Ship Yards. Whilst at first being helpful to the player in their quest to find the missing 10th Squad during the quest, it is later revealed that he and Waydar are in fact agents of Glough and are trying to continue their masters plans for a Gnome-Human war; however, the player and the 10th Squad are able to stop their plan from succeeding. Caranock is also a confirmed customer in case of hard order in Gnome Restaurant.