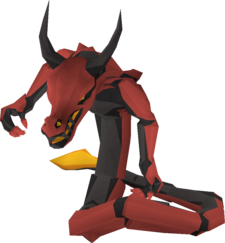 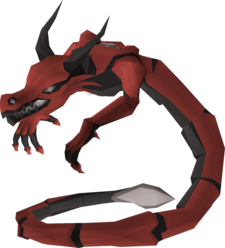 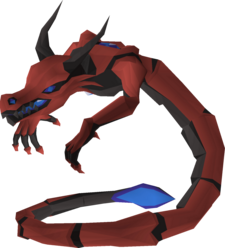 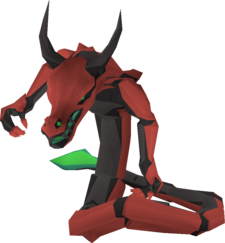 Galvek is the final boss of the Dragon Slayer II quest. He was a dragon incubated by the Dragonkin Zorgoth, who planned to use Galvek to destroy humanity after being imprisoned for ages because he was presumed to be a violent Dragonkin. Zorgoth gave it the name "Galvek" because it was the Dragonkin word for "Fate". Galvek is a special breed of dragon, as it is more serpent-like and has the ability to control other dragons.

Galvek was later killed by the player in a prolonged battle. He attempted to launch a final ball of dragonfire at the player, but collapsed before he was able to do so, incinerating his creator instead.

After the quest, players can fight Galvek again through the Pool of Dreams in the Myths' Guild, where deaths are considered safe. The Dream List next to the pool also tracks the player's kill count and fastest kill time.

Galvek has 1,200 health and four phases, with each phase consisting of 300 Hitpoints. He uses all three forms of Combat, and a special dragonfire attack which is capable of killing players in one hit if they do not move away from it, regardless of their protection. If next to the tile which was hit by dragonfire, players take half the damage instead.

If player is outside of melee range, he may use a blue attack that pulls the player closer.

The effects of super antifire potion do not work against the special one-hit attack. However, using a super antifire potion in combination with the Anti-dragon shield will nullify all damage from his orange and pink dragonfire attacks. Using the potion on its own will not reduce damage much, and using the shield on its own will reduce damage significantly.

While defence lowering special attacks work, after each phase the defence of Galvek is reset.

If you try to summon a Thrall you will be informed that "It's far too wet for you to resurrect a thrall here." 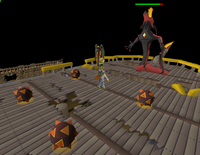 Galvek stands at the bow of the ship, attacking players with Melee and Magic. He can occasionally launch fire bombs, which if touched (bombs cover a 3x3 radius), will deal an incredible amount of damage, and will very likely instantly kill the player. These fire bombs are always placed in the same position, and will explode after a set amount of time has passed. This phase is common to die in due to players trying to move to avoid his dragonfire attack or moving at the same time Galvek teleports them, resulting in the player running into a bomb and dying. Galvek's defense in this phase can be lowered, however on transition to phase II his defence will be restored to its base value. 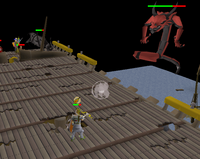 Galvek takes on the powers of air, flying towards the western side of the ship. He can occasionally launch gusts of wind that drain the player's stats by 2 and run energy by 40%. Galvek also begins to use Ranged attacks here and uses his Ranged and Magic attacks at random. Galvek still uses the one-hit fireball in this stage.

Galvek takes on the powers of water, flying towards the eastern side of the ship. He can occasionally send out tsunamis (acting much like the fire waves during a fight in the quest A Kingdom Divided) along with the standard one-hit fireball. If hit by these waves, the player will take over 100 damage. Phase III has the potential to be Galvek's deadliest phase, as the player is incredibly limited to movement if Galvek launches his tsunami and his fireball subsequently, leaving almost no room for error. Galvek also uses Ranged attacks much more commonly in this phase.

Galvek takes on the powers of earth, landing on the middle of the ship. He can occasionally launch earth projectiles, which if the player is caught in, will be bound for several seconds. This deals no actual damage to the player, but leaves them extremely vulnerable to the highly damaging dragonfire, which he almost always uses if he is successful in binding the player. His earth attack can be avoided by simply moving one square. Moreover, walking in circles around Galvek or back and forth on the North or South end allows the player to avoid his rocks and dragonfire.