If all eight tables are taken, players must wait until a game is over before challenging others, though players can spectate ongoing matches. Players can also play the same board games at the following pubs, which have two tables each:

There are no rewards or prizes for playing each except for game rankings (if the player chooses to play ranked games).

The Games Zone's board games are quite common brain-teasing puzzle games, such as Othello, Draughts (known as checkers in North America), and Connect Four. They are played with one person at a time, and the player can be challenged to any of the four games provided that they are in the area. 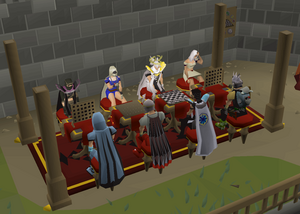 Players playing a variety of board games at the Games Zone

Players need 1,500 rank in the relevant game in order to go to some of the upstairs rooms in the Burthorpe Games Room, but otherwise have no bearing on the Games Zone.