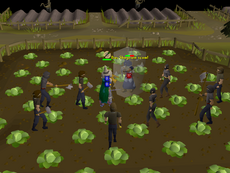 A Gang Boss is encountered in Great Kourend during the Shayzien Tackle organised crime activity, requiring 40% Shayzien favour to attack. They appear at select locations along with a group of 4-14 gangsters. They will despawn from all worlds 5 minutes after the time they were scheduled to appear.

Drop rates estimated based on 698,222 kills from the Drop Rate Project, unless otherwise cited.