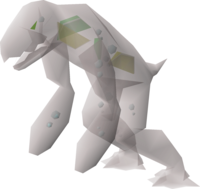 The Gelatinnoth Mother is a monster encountered during the final battles in the Recipe for Disaster quest. She is the equivalent to the Dagannoth mother from the Horror from the Deep quest, although Gelatinnoth Mother will switch colours after a certain amount of damage/hits is dealt. She will turn different colours every 15 to 20 seconds, not counting damage/hits dealt in the current colour, and her colour shows her weakness to a certain type of magic spell or attack.

The Gelatinnoth Mother can be fought as a boss monster in the Nightmare Zone minigame if the player has completed Recipe for Disaster.

The following table shows her colours in the order she cycles through them in the Defeating the Culinaromancer subquest and lists which attacks she is weak against in each state.

Since the Gelatinnoth Mother attacks with Ranged and Magic simultaneously, the armour to wear is the best dragonhide armour (body and chaps) the player can wear, or Karil's, alongside the best melee helmet they can wear (Barrows/serpentine helm, dragon med helm), while wearing a dragonfire shield, granite shield or toktz-ket-xil. This would give the player a well-balanced compromise in regards to Ranged and Magic defence, while not sacrificing too much Magic attack bonus.