From Old School RuneScape Wiki
Jump to navigation Jump to search
The RuneScape Wiki also has an article on: rsw:Gem bag
Not to be confused with Bag full of gems.
Gem bagOpen gem bag? (edit)ClosedOpen? (edit)? (edit) 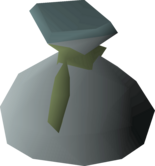 The gem bag is an item purchasable from Prospector Percy's Nugget Shop for 100 golden nuggets. It can hold 60 of each (300 total) uncut gems of the following types:

A full gem bag is worth 1,115,400. To deposit a gem, players can use the gem with the gem bag or left-click the bag to store all uncut gems in their inventory. This will produce a chatbox message saying, "You add the gem[s] to your bag." Players can empty the bag via a right-click option or by shift-clicking the bag (if they have shift-click item dropping enabled) in their inventory or while their bank is open.

Players can "open" the bag via a right-click option. While open, any gems that the player picks up off the ground or obtains during Mining and Thieving are automatically placed inside the bag, if there is enough space.

Players may only own one gem bag at a time. Players who no longer want their gem bag can sell it back to Percy for 80% of the original cost.

On death, the gem bag does not lose its contents.

The gem bag is useful in activities that involve collecting uncut gems to save inventory space and reduce bank trips. Examples of such uses are: buying gems from TzHaar gem shops; collecting gems dropped by monsters who drop gems frequently, such as goraks, in addition to many Slayer monsters (almost exclusively via the gem drop table); and cracking wall safes in the Rogues' Den. Gems mined from gem rocks, Motherlode Mine, Daeyalt essence mine, and regular mining (a charged amulet of glory will increase the amount of gems from mining), or stolen from TzHaar-Hur, stone chests, Vyrewatch, and gem stalls are automatically placed in the gem bag while it is open, removing the need to put them in manually.

The gem bag can also be used while doing muddy key runs in the Wilderness or crystal key runs in Taverley or Prifddinas. The muddy chest and the crystal chest/Elven Crystal Chest yield one uncut ruby and one uncut dragonstone respectively each time they are opened, therefore the gem bag can allow a player to carry back much more loot from the chest if they bring multiple keys.