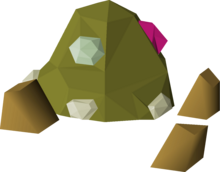 Gem rocks can be mined through the Mining skill. A Mining level of 40 is required to mine gem rocks, granting 65 Mining experience per gem.

Normal gem rocks can be mined in Shilo Village after a player has completed the Shilo Village quest or in the Lunar Isle mine after Lunar Diplomacy. The rocks regenerate 99 ticks (59.4 seconds) after being mined. Wearing a charged amulet of glory triples the success rate of mining these gem rocks.[1] There is also another kind of gem rock which randomly appears during the Tai Bwo Wannai Cleanup minigame with a 5% chance per event.[2] These rocks can be mined three times before they despawn.

The Shilo Village mine in the north-west part of the village has two sections: overground and underground. The underground section is only available for players who have completed hard Karamja Diary, and it includes significantly more gem rocks than on the surface as well as a Bank Deposit Chest. For those who can only access the gem rocks on the surface, using a gem bag can extend trips.

Varrock Armour 1 or higher does not work on Gem Rocks.

When a gem rock is mined, one of the following gems is produced:

Taking this into consideration, mining a gem rock is worth 477 on average.