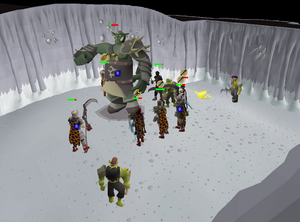 A group of players fighting General Graardor and his bodyguards.

This is a guide to killing General Graardor with Melee and Ranged. It will take you through the basics of attacking and tanking, as well as provide a few examples of what equipment to bring.

Note that Melee is the most straightforward combat style to use since it suffers no penalties from tank armour. Ranged setups can also deal significant damage, but are less feasible for tanks.

Graardor attacks with both Melee and Ranged:

Graardor's combat stats consist of 280 Attack, 350 Strength, 250 Defence, 80 Magic and 350 Ranged. Both his melee and ranged attacks possess accuracy and strength bonuses, with an additional 120 Attack bonus and 43 Strength bonus for melee, and 100 Ranged bonus with 40 Ranged strength bonus.

After Graardor is dead, the goblin sergeants will all focus on a single player, typically the one who landed the killing blow on Graardor. For this reason, Steelwill should be killed immediately, allowing the targeted player to switch to Protect from Ranged once he is dead, as to block Grimspike's attacks.

In solo encounters, the player should kill Steelwill as usual and lure Strongstack onto Grimspike and cast Blood Barrage on the two goblins, as they have a fairly poor Magic level and no defence. It is also far more consistent than Guthan's, which is relatively slow and Graardor might respawn as the player is fighting the sergeants. Water runes may be brought along (if not using a kodai wand) for Ice Barrage if necessary, so the player doesn't have to flick as much between melee and ranged.

Graardor and his bodyguards drop bones, so players should bring bones to peaches tabs and collect all the bones before converting them into peaches. Peaches heal for 8 health, so the player can restore 32 health after each encounter with Graardor and his minions.

The player must optimize both magic and ranged defence (as trying to tank Graardor's melee attacks means certain death), preventing the use of justiciar armour, as taking the set would result in Steelwill hitting frequently and causing unnecessary damage in solo encounters. As a result of increasing their magic defence, their ranged defence will suffer, causing Graardor's ranged attacks and Grimspike to hit more often.

In group encounters, this is less of a worry as the sergeants tend to focus on whoever successfully struck Graardor.

When using a weapon with an attack speed of 4 (2.4 seconds), attack Graardor twice before moving under him. Graardor has an attack speed of 6 (3.6 seconds), so this reduces the frequency of his attacks and saves food in the long run. The player may also flick attacks from Steelwill and Grimspike if they're attacking on different ticks while under Graardor.

A more experienced version is to simply flick the attacks from Graardor and his minions. This requires all Grimspike, Steelwill and Graardor to attack on different ticks, but this also saves a considerable amount of food when performed properly, as Graardor's ranged attacks will be the only cause of damage inflicted.

An alternative to tanking (whilst dealing no dps to Graardor) is to utilise the Dinh's bulwark on defence mode - by not dealing damage to Graardor, you will never be focussed on by minions, allowing you to prioritise solely on tanking Graardor's ranged attack.

Due to Graardor's reduced Magic level as a result of the twisted bow, magic is another viable method to fight Graardor. Although Graardor has a magic defence bonus of 298, his Magic level of 80 still makes it relatively easy to hit him with high magic accuracy. When Graardor is moving, freeze him with Ice Barrage - this will keep him bound for 20 seconds, before switching to a toxic trident or sanguinesti staff. The tanking player should use Protect from Missiles, as they will be out of Graardor's attack range. Although overall defence is lower, it is still relatively high to protect against Strongstack's attacks.

When Graardor breaks free of his bind, do not freeze him immediately, as all targets struck by an ice spell have a short immunity from another bind. Wait at least 2 seconds before doing so. If Graardor gets too close, switch to Protect from Melee until he is safely out of range.

Only ever attack General Graardor once the tank has attacked; otherwise, Graardor will focus on you. Extra care should be taken by players using Ranged, as it is easier to attack the boss first by accident.

Once Graardor is dead, kill the minions, beginning with Sergeant Steelwill. Stand against the western wall while waiting for General Graardor to respawn, as this gives the tank more time to draw his attention.

Ideally, melee attackers should use Karil's leathertop, a black d'hide body, or Void Knight equipment instead of regular melee armour in order to mitigate Steelwill's attacks, as the sergeants shift aggression based on whoever damaged Graardor recently.

An attacker should bring runes for High Level Alchemy due to the frequent drops of rune equipment.