General Khazard, also known as Khazard, is the main antagonist of the Fight Arena quest. His followers believe that he is an undead maniac who died over 200 years ago, but he is in actuality a Zamorakian Mahjarrat. He has established a large territory between Ardougne and Yanille and is at war with the gnomes.

He may be fought after killing Bouncer, his pet hellhound and only friend, though it is not required. He is spoken to frequently during The General's Shadow miniquest. 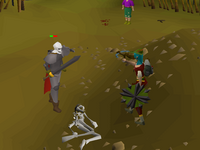 A player fights General Khazard with Ranged using the safespot by trapping him behind a skeleton.

General Khazard is the owner of the Khazard Fight Arena and the one who ordered his men to invade the Tree Gnome Village. During the Fight Arena quest, he kidnaps members of rich families, such as Lady Servil's son and husband, and forces them to fight for their lives at his arena for the entertainment of citizens of Khazard. However, during the quest, he makes a bet with the player, and if the player beats all his monsters, he sets all his fight slaves free. The hero defeats all of Khazard's monsters, and an angry Khazard sets his pet hellhound, Bouncer, on him. The player kills Bouncer, and an enraged Khazard attempts to kill the player, only to be defeated in combat. He survives and later appears in The General's Shadow miniquest.

After the quest, he can be found on the second floor of the Fight Arena building, and may be fought if he was not defeated during the quest.

Khazard is also featured during The General's Shadow miniquest where the player meets Khazard's ghost in the Fremennik Forest. The General appears to have forgotten the player's role in his defeat, as he charges them with speaking to several messengers scattered across Gielinor. After this is done, Khazard tells the player to visit the Goblin Cave near the Fishing Guild for their reward. The "reward", however, is a lie, as the General does indeed remember the player's name, and sets a trap for them. Upon entering the cave, the player is ambushed by the spectre of the General's pet, Bouncer's ghost.

This is not his true form, and he probably thinks other Mahjarrat are weak themselves, as he refers to "them" as cunning, not strong. He has some influence in the Shadow Realm, as he was able to send some of his scouts to spy on human strongholds.