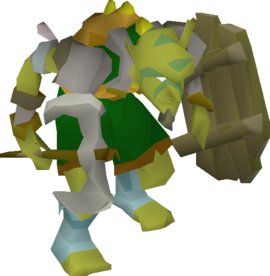 General Wartface is one of the two Goblin Generals found in the northernmost building in Goblin Village. He plays a major role in the Goblin Diplomacy quest.

He is always found standing next to his rival general, General Bentnoze, whom he constantly argues with over armour colours. He favours the colour green while his opponent prefers the colour red.