From Old School RuneScape Wiki
Jump to navigation Jump to search
The RuneScape Wiki also has an article on: rsw:Genie
This article is about the random event. For the genie found in the crevice near Nardah, see Genie (Spirits of the Elid).
Genie? (edit) 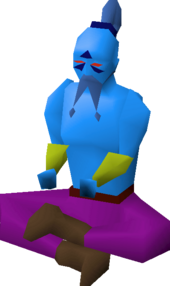 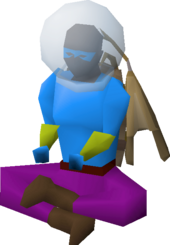 The Genie appears as a random event. The Genie appears near players and gives them an experience lamp, which may be rubbed to raise a selected skill's experience by 10 times the current level of the particular. For example, if the player has level 30 in Herblore, they would gain 300 Herblore experience if the skill is chosen.

The lamp is generally best used on skills that take longer to level up, such as Runecraft or Agility. Alternatively, they can be used for skills that are expensive to train, such as Construction.

Before the Optional Randoms update, the Genie would eventually teleport the player away if ignored.

The Genie's evil brother is encountered in the Spirits of the Elid quest. He resides in a cave west of Nardah, and reveals his distaste for his brother's kindness.