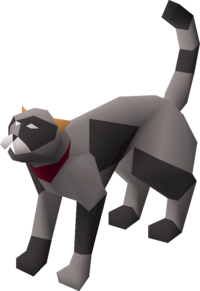 Gertrude's cat (also known as Fluffs) is a cat that belongs to Gertrude, and is the cat that a player must find for her within the Gertrude's Cat quest. After the quest has been completed, she can be seen in the Varrock Rat Pits or up the ladder in the Lumber Yard. According to Gertrude, she is the mother of all the kittens players can buy from her.