Getting Ahead is an intermediate quest, and is the first of the Twisted Tales, which are short, standalone quests taking place in Great Kourend and the Kebos Lowlands.

In Getting Ahead, players are tasked with bringing back the head of a deadly beast terrorizing a local farm.

{"requirements":"*<span class=\"scp\" data-skill=\"Crafting\" data-level=\"30\">[[File:Crafting icon.png|21x21px|link=Crafting|alt=Crafting]] 30 [[Crafting]]</span> <sup>(<span title=\"This requirement is not boostable\" style=\"cursor:help; text-decoration: underline dotted;\">not boostable</span>)</sup>\n*<span class=\"scp\" data-skill=\"Construction\" data-level=\"26\">[[File:Construction icon.png|21x21px|link=Construction|alt=Construction]] 26 [[Construction]]</span> <sup>(<span title=\"This requirement is not boostable\" style=\"cursor:help; text-decoration: underline dotted;\">not boostable</span>)</sup>","desc":"Gordon and Mary are two small-town farmers with a big problem – some heinous beastie keeps taking their livestock! Luckily they’ve hit upon a solution. They just need some brave adventurer to venture into the creature’s lair and bring them back its head. We can’t envisage any complications with such a routine matter, right?","difficulty":"Intermediate","kills":"[[Headless Beast]] (level-82)","name":"Getting Ahead","start":"Speak to [[Gordon]] in their farm south of the [[Farming Guild]].","length":"Short","items":"*[[Bear fur]] or [[grey wolf fur]] (a [[Grizzly bear]] and [[bear cub]] spawn west of the farm and two [[black bear]]s spawn east of the farm)\n*[[Soft clay]] or a [[pickaxe]] you can use\n** [[Clay rocks]] are found in the [[Kebos Lowlands mine]] passed during the quest;\n** Gordon's house has a water source and a bucket spawn;\n** There is a bronze pickaxe spawn at the mine, stuck in some rocks.\n*[[Hammer]] (obtainable near the cattle gate)\n*[[Saw]] (obtainable in the shed north of the house)\n*2 normal [[plank]]s (obtainable near the cave entrance)\n*At least 6 [[nails]] of any kind (iron nails can be found in the workbench north of the house)\n*[[Knife]] (obtainable on the kitchen table in the house)\n*[[Red dye]] (obtainable from the shelves in the house)\n*[[Pot of flour]] (obtainable upstairs in the house)\n*[[Needle]] (obtainable upstairs in the house)\n*[[Thread]] (obtainable upstairs in the house)"} 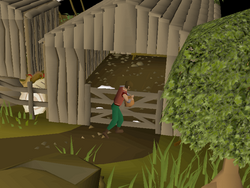 Pouring flour over the gate.

Start the quest by speaking to Gordon in his farm, just south of the Farming Guild. Ask him if he needs a hand with anything, and he'll tell you that some strange beast has been stealing his livestock, and is seeking an adventurer to help them, as the Shayzien soldiers are too busy dealing with lizardmen to help. Agree to help him, and he'll tell you he doesn't exactly know where the beast is, but he'll tell you to try asking his wife, Mary, who is in their house.

Mary will tell you that the beast only comes in the night, so they've never had the chance to get a proper look at it. She suggests, however, that if the beast was coated in flour, it might be easier to track down.

If you don't already have a pot of flour, go upstairs and take one. While here, take the needle and thread as well, as you'll need them later. Talk to Gordon again, who will tell you that the beast has been mainly targeting their cattle, and he had built a gate by their pen to try to keep it out. Use the pot of flour on the southern gate (just north of the bridge), and you'll begin to see a trail of flour going southward. Before tracking the beast, take the hammer by the gate to use towards the end of the quest.

The trail of flour 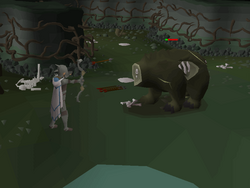 A player fights the Headless Beast from a safespot.

Follow the trail of flour, which ends at the Kebos Lowlands mine. Before entering the cave, take the two planks by the broken rowboat and mine some clay, as it will be used later. Enter the cave to do battle with the Headless Beast.

The Headless Beast uses melee attacks, and has a special attack in which it slams the ground, resulting in a large rock crashing on the player. The rock can be avoided by stepping away before it hits the ground. The beast can be safespotted by trapping it around the pond, where it will never perform the special attack.

Upon killing the beast, search the skeleton nearby to receive Neilan's journal, revealing the beast was the work of a necromancer from the mainland. Return to Gordon, who refuses to pay you as you can't prove you've killed the beast.

Talk to Mary, who suggests to have you make a fake head via the use of clay modelling to fool her husband. Use a knife and a piece of soft clay to create a clay head, and return to Gordon. Still not convinced, add bear fur to the head (while having a needle and thread) to create a fur head and speak to him again. He will remain unconvinced, so add a red dye (found by searching the shelves next to the stairs in the house) to create a bloody head. 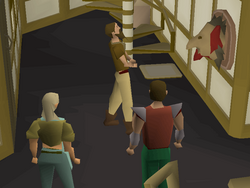 Gordon is fooled by the mounted head, much to your and Mary's relief.

The bloody head will finally convince him, and he asks that you mount the head in his house. A Mounted Head Space will appear by the staircase in the house. Players will need a hammer, saw, nails of any kind, and two planks.

A hammer can be found by the gate where you poured the flour, while the saw can be found by the small barn with the ancient machinery. The workbench inside can also be searched for twenty iron nails. After mounting the bloody head, return to Gordon once more. 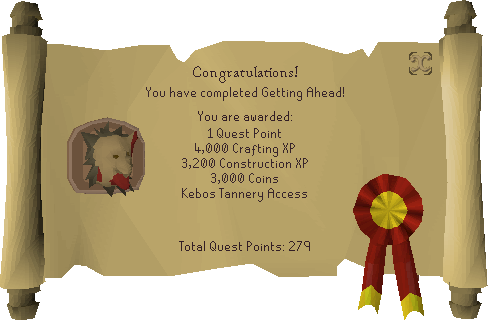