Ghouls are found just west of Canifis, north of the swamp and west of the fairy ring code CKS. Though they may appear to be undead, and are often mistaken for such, they are in fact still alive and thus immune to both the Crumble Undead spell and to the effects of the salve amulet and salve amulet (e). A ghoul bone is needed to complete the Rag and Bone Man II. Killing a ghoul is a requirement for the easy Morytania Diary.

Ghouls can be somewhat troublesome to kill. When a ghoul has low hitpoints, it will stop attacking the player and retreat, allowing other ghouls to attack. Applying poison can be an effective method of killing the previous ghoul whilst attacking the next one. However, due to their low accuracy and high HP, they are generally a good place for higher levels to train.

An efficient way to kill a ghoul can be through magic or ranged, melee is optional but remember they do flee when their health gets low.

If a player lures one of the two southmost ghouls to the south-west of the ghoul area, just to the left of the westmost plant, the player can run to the north side of the ghoul effectively trapping it in that corner. The ghoul will be unable to retreat as the player will move with it as it tries to run away and continue to block it from moving further. Occasionally another ghoul will get close enough to interrupt the final blows of the fight, but the player can run south of the almost dead ghoul and keep it trapped between the player and aggressive ghoul.

Currently it is possible for a ghoul to randomly attack a player lower than level 85 combat, ignoring any current engagement that player may be in. This is especially annoying as you won't be able to secure the kill to get the Slayer xp, because the game will say "I'm already under attack".

The ghouls to the west of Canifis are safespottable using the gravestones. 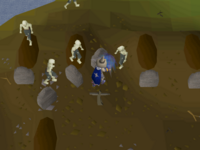