The banner hung after defeating the Ghoul Champion.

The Ghoul Champion can only be fought after receiving the ghoul champion scroll as part of the Champions' Challenge minigame.

The special rule in this fight is that the player cannot use any equipment except weaponry.

Since the restriction disallows the use of the ammo slot, players wanting to use Ranged should note that the only weaponry that work are those that require no ammo in the ammo slot such as throwing weapons, the toxic blowpipe, crystal bow and Craw's bow.

Players who do not want to take any damage can use a halberd or Ranged weapon and stay out of melee distance with Protect from Ranged active as the champion will not close in to use its melee attack. 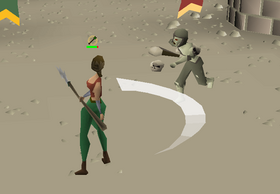 A player duels with the Ghoul Champion. 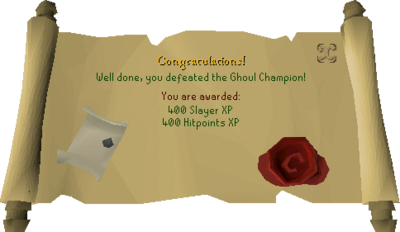