The banner hung after defeating the Giant Champion.

The Giant Champion can only be fought after receiving the giant champion scroll as part of the Champion's Challenge minigame.

The special rule in this fight is that the player can only use melee. It is possible to safespot the champion using a halberd, however. This can be done by first walking to the northernmost wall, and then walking east to west in the middle section. The Giant Champion will get stuck on the part with the human flags, meaning it is possible to attack it from directly next to the railing with either the gnome flag, or the TzHaar flag behind it. 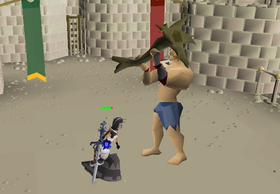 A player duels with the Giant Champion. 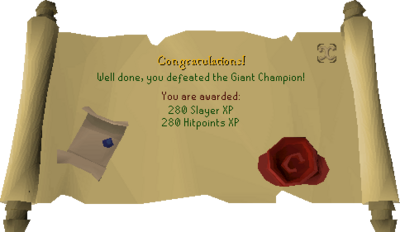