The Giant Mole (Talpidae wysonian[1]) is a boss found in the Falador Mole Lair, just under Falador Park, alongside some baby moles. The Giant Mole's origin and creation are described as "a slight accident involving a bottle of Malignius-Mortifer's-Super-Ultra-Flora-Growth-Potion".[2]

The Giant Mole is located in the tunnels beneath Falador Park. A spade is required to enter her lair. A light source is also needed to be able to see in the dark tunnels. A bullseye lantern or Kandarin headgear is highly recommended; any candles, torches, or oil lamps will be extinguished if she retreats within melee range. If you are using an unprotected light source such as a candle, you will need a tinderbox to reignite it. If you have achieved 99 Firemaking, you can also bring the Firemaking Skillcape either equipped or in your inventory, as it will act as a light source that cannot extinguish. Alternatively, if a player has completed the quest Making Friends With My Arm and has lit the fire pit within the lair, they will no longer need to carry a light source in their inventory. 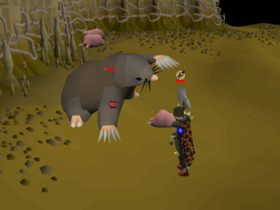 The most common method of killing the Giant Mole is with Dharok the Wretched's equipment and 1 health (often achieved by guzzling a Dwarven rock cake or by using a Locator orb), as well as having the Protect from Melee prayer active to avoid taking any damage. This results in higher hits that decrease the time it takes to kill it significantly.

The alternative to this low health method, for those uncomfortable with combat at low health (e.g. Hardcore Ironman), is using your best Strength bonus melee gear, or best-in-slot ranged gear with a Twisted bow, the latter of which is the fastest method of killing it.

When the mole's health is between 5-50%, there is a 25% chance for any incoming attack to cause it to burrow away into another location.[3] There is also a chance that the dirt she digs while burrowing to escape can extinguish the player's light source (shown with dirt splatters on the player's screen), though covered light sources will be unaffected by this. Since you will be running a lot, it is recommended to bring a fair amount of Stamina or energy potions.

Drop rates estimated based on 26,773 kills from the Drop Rate Project, unless otherwise cited.