From Old School RuneScape Wiki
< Giant Mole
Jump to navigation Jump to search
The RuneScape Wiki also has an article on: rsw:Giant mole/Strategies 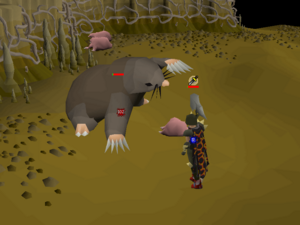 The Giant Mole is a fairly simple low-level boss that can be found under Falador. It is killed for its mole claw, mole skin and Baby mole drops.

The Giant Mole is located in the Mole Lair under Falador. The entrance point is located at Falador Park, where there are mole holes scattered on the west side. Players must bring a spade to dig underground, and a light source of some type or they will be constantly bitten by bugs. 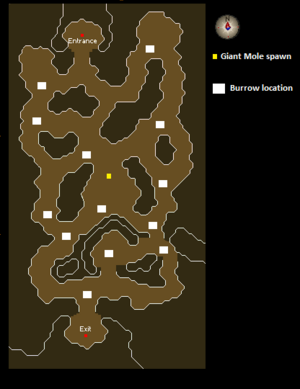 A map of the Falador Mole Lair, labelling spawn location and burrow locations of the Giant Mole.

Killing the mole is easy, as it doesn't have any unique abilities that can endanger the player.

For low levelled players, they can safespot it with the cavern walls, as it does not move around the safespot to attack players. Ranging is highly recommended when safespotting, as it has low ranged defence. Players meleeing it should activate Protect from Melee and use stabbing weapons, as it has lower stab defence compared to slash and crush.

For high levelled players, the mole can be killed quickly with Dharok the Wretched's equipment, as it is easily possible to kill her within 2-3 hits depending on the player's strength boosting equipment. Simply lower your health to 1 with the Locator orb or Dwarven rock cake, activate Protect from Melee and flick Piety.

When the mole reaches half health and lower, there is a chance that it will dig away to another location in the lair. Without the Falador shield 3 or 4, it can be a tedious task, as players may have to navigate through the whole lair to find the mole. The mole also loses aggression towards the primary target when burrowing away.

While the mole is not immune to poison, it's recommended to avoid poisoning it without the shield, as taking damage from the poison could cause it to burrow again while you're looking for it.

Completion of the hard Falador diaries is highly recommended, as players with the shield can locate the mole whenever it digs away. It also notes the 100% drop of mole skin and claws, prolonging trips.

Using twisted bow is the most effective way to kill the Giant Mole, and offers far superior kills per hour than any other weapons or setups. A dwarf multicannon can also be brought to speed up kills.

Using twisted bow with Elite Void Knight equipment offers slightly less kills per hour than using Armadyl armour. This setup has the benefit of being able to special attack with the void melee helm & dragon warhammer, and the Elite Void Knight equipment also offers a substantial prayer bonus. A dwarf multicannon can also be brought to speed up kills.

Using Dharok the Wretched's equipment offers fewer kills per hour than the twisted bow, but is a much more affordable option for most players. Use the locator orb or a dwarven rock cake to get down to 1 Hitpoint. Always keep Protect from Melee on when you're attacking the boss. If the player does not own a cape that provides a Strength bonus, they can instead use a cape that provides a prayer bonus to maximise the amount of time Protect from Melee is active before needing to restore Prayer Points.

Using ghrazi rapier with Void Knight equipment offers similar kills per hour as using Dharok the Wretched's equipment. This setup has the benefit of not having to keep Hitpoints at 1, which eliminates the accidental deaths when the player is not praying Protect from Melee, and the elite Void Knight equipment also offers a substantial prayer bonus. However, the ghrazi rapier is significantly more expensive than the Dharok's set. If the player does not have a ghrazi rapier, using Dharok's offers more kills per hour.

Using melee without Void Knight equipment offers less kills per hour than Void or Dharok the Wretched's equipment. This setup has the advantage of using cheap gear and not requiring untradable items, making it more accessible for newer players. You should Protect from Melee when in combat with the Giant Mole