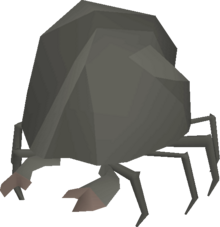 Giant rock crabs are massive versions of the weaker Rock crab. They lie in wait for prey, disguised as large boulders. When approached, they attack, unless they have become tolerant, in which case they remain as "boulders" - attempting to cast a spell on them gives the message "You can't attack this NPC."

Giant rock crabs are only initially aggressive if they are approached while dormant. Once they are moving and the targeted player is out of range, they stop being aggressive and will ignore players that don't attack them. They eventually become dormant boulders again after a while if they are not attacked.

The giant rock crab is one of few monsters in RuneScape that will retreat from battle when they become critically wounded. This can be troublesome, as they are found in a single-way combat area. This can be prevented by attacking them while their back is turned to a nearby wall, so that they move away from the player and back up into the wall. If they move too far away, the player will follow them and risk being attacked by another rock crab. There are several protruding sections of the walls in the area that can be used as safespots which are ideal as the crabs' main weakness is magic.

If one wishes to use melee, the crabs can be killed deeper into the cave where there are several spawns in multi-way combat. These crabs will still drop their unique items on the drop table.

Drop rates estimated based on 1,715 kills from the Drop Rate Project, unless otherwise cited.

There is a 1/128 chance of rolling the rare seed drop table.

There is a 10/128 chance of rolling the talisman drop table.