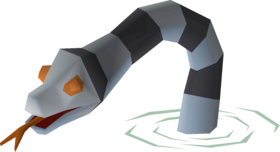 The Giant Sea Snake is encountered at the end of the Royal Trouble quest. It is not as strong as its combat level suggests, but an antipoison potion, preferably super, is vital, as the snake is poisonous with damage that starts at 9. It fights with melee up close and ranged from a distance, but it cannot detect the use of prayers. Like its offspring, it is vulnerable to Magic. It drops the heavy box which is needed to finish the quest, and it can only be fought once.

Level 40 Slayer is required to kill this creature.

The best way to defeat the snake is to attack it from afar with magic to exploit its weakness. Players can freely use Protect from Missiles to reduce all the damage besides poison. Other factors such as what food to bring and what armour and weapon to use are left to the player's decision. It is recommended to bring at least lobsters or swordfish. A dwarf multicannon can be setup in this area.

There is a 14/128 chance of rolling the uncommon seed drop table.