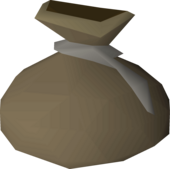 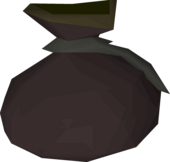 Giant pouches are the second best essence pouches and can hold 12 rune, pure, daeyalt, or guardian essence for use in the Runecraft skill. This item requires level 75 Runecraft to use. This item is dropped by some of the Abyssal monsters in the Abyss.

After enough use, the pouch degrades and holds three less pure essence. Every two to three uses after results in an additional one less pure essence that the pouch can hold. It can be repaired by talking to Dark mage either in person in the Abyss or through NPC Contact. The giant pouch, like its smaller variants, does not degrade if the player is wearing a Runecraft cape or max cape when filling it.

The pouch degrades based on essence stored rather than how often it is used. 140 essence can be stored before it degrades, or 11 fills and the 12th degrades to 9 essence. Ideally the player should repair after 11 times, to avoid storing less essence.

The pouch is only dropped if the player does not already have one in their inventory or bank, and lower-tiered pouches are owned. The Runecraft level (75) is not necessary to have in order for the pouch to be dropped.