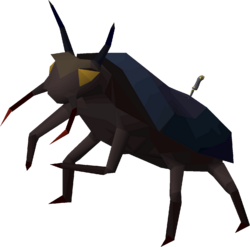 The Giant Scarab is fought during the final battle of the Contact! quest. It summons level 68 Locust riders and Scarab mages to aid it in battle. The scarab is the sixth-highest level quest-only monster that is fought via conventional means in the game.

It can hit around 20 hitpoints with melee and ranged and is very poisonous, with the poison damage starting at 9. If the player is out of melee distance from the scarab and has Protect from Missiles active, a message will appear in the player's chatbox "The vast scarab clacks its mandibles and you are mystically poisoned", negating the player's anti-poison timer and inflicting them with poison that hits for 9 hitpoints.

The grey object in its back is Kaleef's Keris dagger.

It can be fought in the Nightmare Zone after the quest is complete. Unlike the quest battle, its range attack won’t poison the player and the Keris can be used against it.

The Giant scarab manifests itself.

Throughout the fight, the scarab will summon minions to aid it, which will use a random attack style, and the player is likely to be affected by multiple attack styles at once. This may not occur, if you manage to kill the scarab very quickly. Players fighting the scarab up close should activate Protect from Melee, while players attacking from afar should activate Protect from Missiles. The scarab is resistant to melee, although weaker to stab than any other melee style, so a Zamorakian spear is recommended over an abyssal whip.

Using Verac's set and the Spike attack style is also a good idea due to the high melee/Ranged defence bonuses the set provides, and the set effect being able to ignore the scarab's Defence, as well as taking advantage of its stab weakness.

The scarab also has fairly low Magic defence, so a Trident of the seas/swamp or Iban's staff is ideal if using Magic, with good Magic armour worn such as Mystic robes. However, players with 60+ Ranged should have no problem killing it in around 2 minutes. Use the best crossbow you can; for players with a lower Ranged level, using Ruby bolts (e) is effective - higher levels should consider using the Toxic blowpipe.

During the quest, the scarab is immune to poison (though not in Nightmare Zone).

Players using Ranged or Magic should run to the south-west corner of the room with Protect from Missiles active, mitigating the melee-using locust riders as they will be unable to reach the player and only taking damage from scarab mages. Otherwise do the same at the lake to the north.